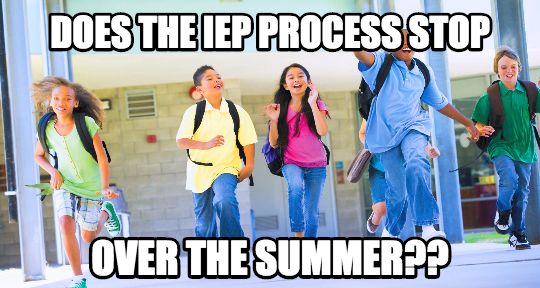 With the 2015-2016 School Year coming to an end many parents are in a frenzy to ensure that their child will have the appropriate supports and services in place for the 2016-2017 school year. Some families may not have realized that their child wasn’t making progress until the spring and requested an evaluation, or their district offered to conduct evaluation, sometime in May or June. Will that evaluation get done before the end of the school year to ensure a meeting can be convened to discuss the necessary supports moving forward?

There is a concern that the last day of school means not only summer break for students, but also shuttered school house doors and teachers relocating to beaches. Is everything really on pause for the next three months? The answer, unfortunately, at least for initial evaluations in Pennsylvania is yes.

You can see the below chart (taken from pattan.net) which neatly depicts the timelines associated with different actions  associated with evaluations. The chart also cites the law relevant to each action. 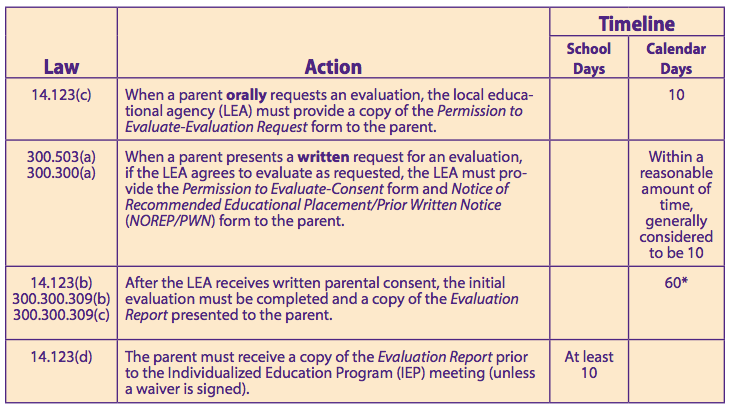 You will notice an * next to the 60day requirement for an evaluation report to be presented to a parent after the parent signs the initial consent form. This asterisk is referring to PA Code § 14.123 (b)  which states,

“In addition to the requirements incorporated by reference in 34 CFR 300.301 (relating to initial evaluations), the initial evaluation shall be completed and a copy of the evaluation report presented to the parents no later than 60-calendar days after the agency receives written parental consent for evaluation, except that the calendar days from the day after the last day of the spring school term up to and including the day before the first day of the subsequent fall school term will not be counted.

What this is saying essentially is that the timeline is frozen over the summer! How could this be? It really doesn’t make much sense. Because the district failed to offer a permission to evaluate (PTE) until the end of the year, now they can wait even more time until they have to deliver an Evaluation Report (ER). To illustrate how this plays out in the real world:

Joe has not had a good year at school. He has been failing most of his classes since the 1st marking period and his behaviors have gotten progressively worse. The district has noted Joe’s failure and regressions in several emails to parent as well as on the notes on his report card, however they never offered anything more. On April 20, Joe’s mom (Mary) said enough is enough and demanded a meeting with the school.  At this meeting Mary orally requested that Joe be evaluated. Since this request was not in writing, the district has 10 days to present Mary with a Permission to Evaluate – Evaluation Request Form (note, this isn’t a consent form, it is a request form – consent must still be given).

Giving the district the benefit of the doubt that they get the PTE REQUEST Form to Mary by April 30, the district now how has a reasonable time (about 10 more days) to provide the CONSENT form. This takes us to May 10.

Once the consent form is filled out and signed by parent, the 60 day clock starts ticking, but now it is already May 10 – almost a month after Mom had the first meeting with the school – and nothing has really started! Considering that the District utilizes all of the time available to them (the full 60 days) Mary would not have to be provided with an ER until sometimes in the 2016-2017 school year. Let’s say school ends June 17 and Starts September 6.

There are about 38 days from May 10 to June 17. From June 17 we pause the clock. Picking back up on September 6 (when school starts) we won’t expect the report until October 5 – almost 6 months after the initial request for an evaluation!!

The Evaluation Report is due (around) October 5 (I am just using rough calculations for demonstration purposes), but you can see that there is a problem. Six months went by and an Individualized Education Program (IEP) still isn’t in place. The school still has 30 more days from the time the ER is completed to convene an IEP meeting!!

Once the team meets, pursuant to   PA CODE § 14.131 (a) (6)  The IEP of each student shall be implemented as soon as possible, but no later than 10 school days after its completion. So, theoretically, the IEP is implemented by November 15, seven (7) months after the initial request for an evaluation.

Nearly 7 months later an IEP is in place. Joe was arguably denied a FAPE for several months, if not more (including time for extended school year if it is eventually determined that Joe was eligible for ESY services).  What can be done?

What is the remedy?

The remedy would be in the form of compensatory education. A fund that can be used to supplement the services offered moving forward to account for the past denial of FAPE. If your child has been a victim of misplaced services it is worthwhile to consult with an attorney to see if there may be some recourse. The district can put off the inevitable, but eventually they are going to have to pay up. There is accountability.

What can we do to mitigate damages?

Of course, this isn’t legal advice and every case is different. Timelines are not set in stone and your particular case could be cause for a deviation. Consult with an attorney to ensure your rights and your child’s rights are being protected.